They battled it out on Saturday, May 14th, and during a torrential downpour no less!

The prize? Bragging rights for the year and the coveted Cape May Brewing Company Cup, featuring a gorgeous commemorative cleat atop a sixtel keg!

If you haven’t heard of our local rugby leagues yet, take a look at this quick feature, where we caught up with Alex Brigden of the Jersey Shore Sharks before the game! 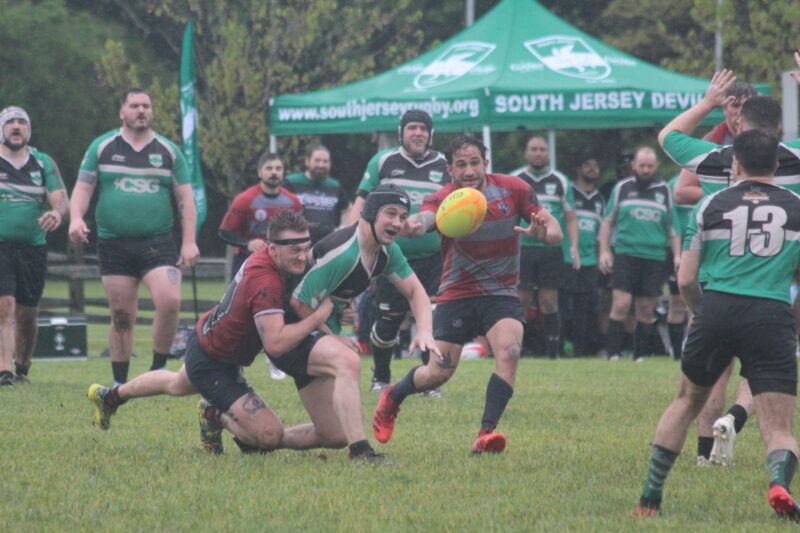 The Sharks had played the field, at Veteran’s Memorial Park in Galloway, the week before the game. That Saturday was also particularly rainy, so Alex joked that it was the perfect warmup for this game. We took a few minutes to chat with him as we watched the players warm up.

“Pretty much everyone here has a full-time job and this is their hobby,” Alex shares.

A player, drenched from the continued downpour, stopped to speak with Alex about his graduation this past month, and how he’d be able to fully commit for the fall season since his clinicals were typically on Saturdays and classes during the week.

Despite having other things going on, many of the team members are dedicated to making time during the season, with practice about twice a week, and most games on Saturdays.

They started the season this past February, while it was still pretty chilly out! The teams play about half the year, with a spring and a fall season.

“Fall starts back up in August and ends around November,” Alex says.

One of the best aspects of rugby, especially for our local teams here, is how close-knit the teams are and how supportive the community is.

“We’re a band of brothers,” Alex notes. “Some of the guys are here every year, and some people come and go, or come back to the team.” 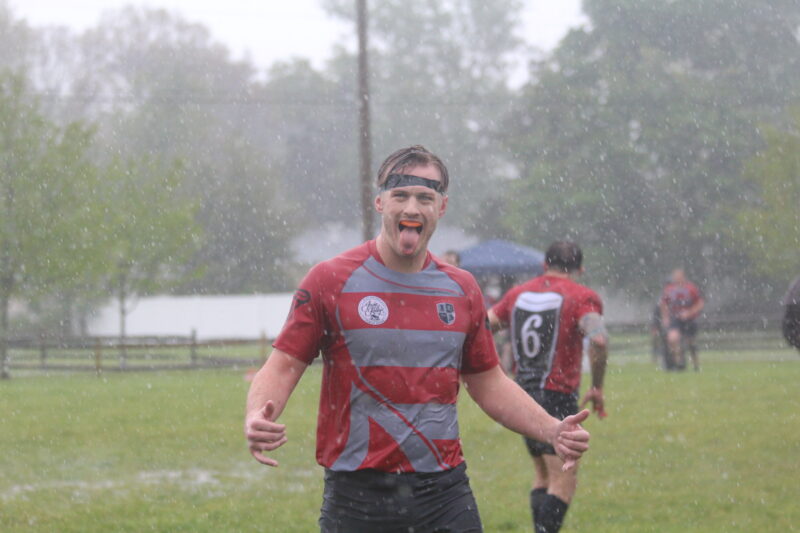 Alex has been playing himself for 16 years, and now his 17-year old son also plays alongside him!

“He’s starting the game today,” Alex says. “He and I started a lot of games together this season. He’s a high school senior now.”

While Alex and his son are normally on the field together, due to a recent concussion, Alex sat out this game to recuperate.

Alex motions towards the field as we watch the players warm up and practice.

“That guy getting the ball right now, I remember him when he was about knee-high,” he says. “His stepfather starts also, so it’s like a father-son duo.”

That’s another great aspect of rugby—you’ll see a wide variety of ages out on the field. The so-called old boys even played a game on the field before the main event.

Although Alex was taking it easy when we spoke with him, he let us know that injuries aren’t super common. 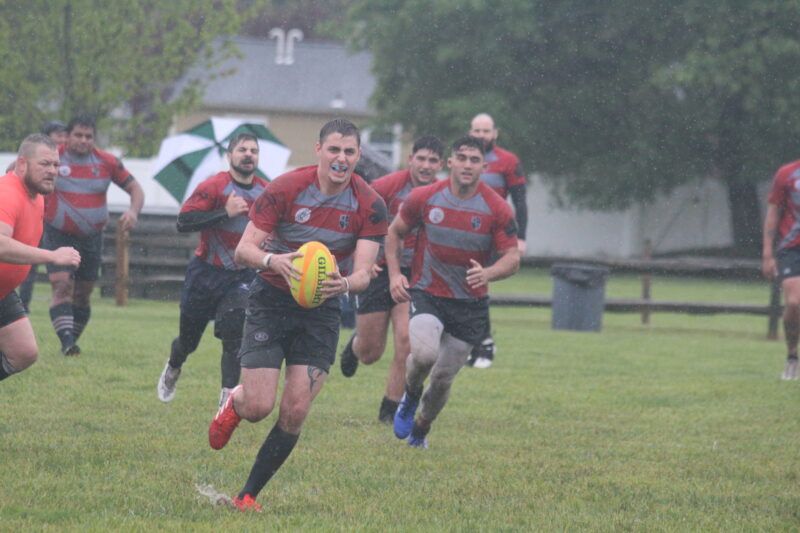 “My injury is the exception, but you get your normal dings and bumps and bruises. Occasionally someone gets a little more dinged up,” Alex says.

“Once you understand the game, you can play it from the perspective that everything is in front of you. Usually, it’s legitimately an accident if something goes wrong,” he says.

Although there’s a lot of different rules specific to rugby, like a lack of formal pads and passing the ball off backwards to your teammates, if there’s one thing to know about rugby, it’s that the culture is super supportive:

“Everybody gets together, you hate each other for about 80 minutes, then you go and get a drink with each other afterwards,” Alex says.

“After every game, there’s always what we call a drink-up,” he says. “Usually we go to a bar all together and the home team supplies the food.”

“I wish we could drink Cape May all the time,” Alex says with a grin. “But our budget goes very quickly. $300 goes fast when you’re doing pitchers.”

Cape May Brewing Company has sponsored the South Jersey Brew Cup since its inception in 2019, and a brief hiatus with COVID meant that this is the second year for the game!

Alex has had Cape May beer since we opened, and visited when we were just pouring out of one small room!

His favorite Cape May brews include Honey Porter and The Grove, the latter of which he loves bringing to the beach. 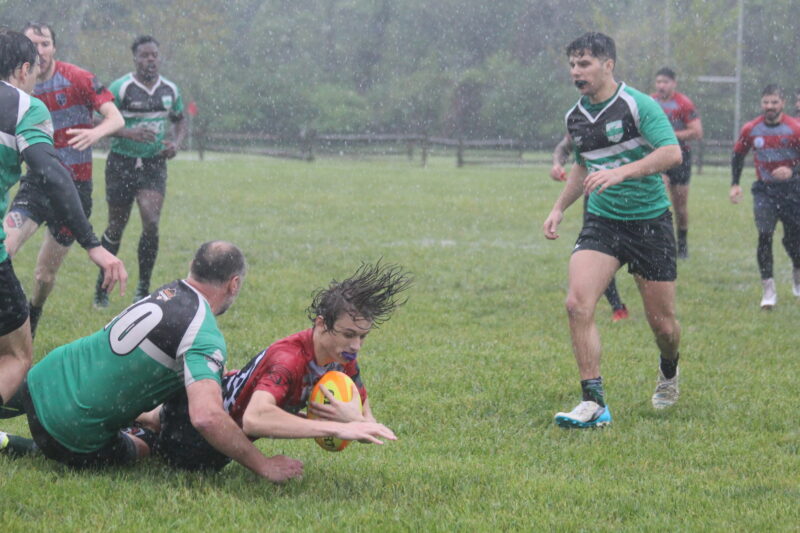 [Ed. note: Ah, a fellow connoisseur of shandy cocktails, like our very own brewer Brad Young!]

“I’m a big fan of Always Ready too,” he says. “I’m drinking Tan Limes today in this.” He holds up his snazzy drink holder, outfitted with the team and Cape May’s logos.

“The first Cape May brew I ever bought my dad was Honey Porter,” he says. “He’s still a fan of it now. If it’s on tap, he always gets it.”

We watch the players slide around the wet field, kicking up waves of water in their wake.

For rugby, as far as padding goes, a mouthpiece and cleats are usually all you need.

“Some people wear a little bit of padding for their shoulders, or a scrum cap for your head,” Alex says. “That probably would have saved me a nasty concussion if I’d worn one.”

Brand Ambassador Kyle Shultz held down the fort protecting the beer from the rain, offering Tan Limes and Always Ready to spectators eager to watch the game unfold.

It was Kyle’s first time watching a rugby game, and he shares that he was shocked at the size of the ball.

“It’s a lot lighter, rounder, and more rubber-y than I thought,” Kyle says. “It’s tough to throw it sideways, and I played every kind of sport.” 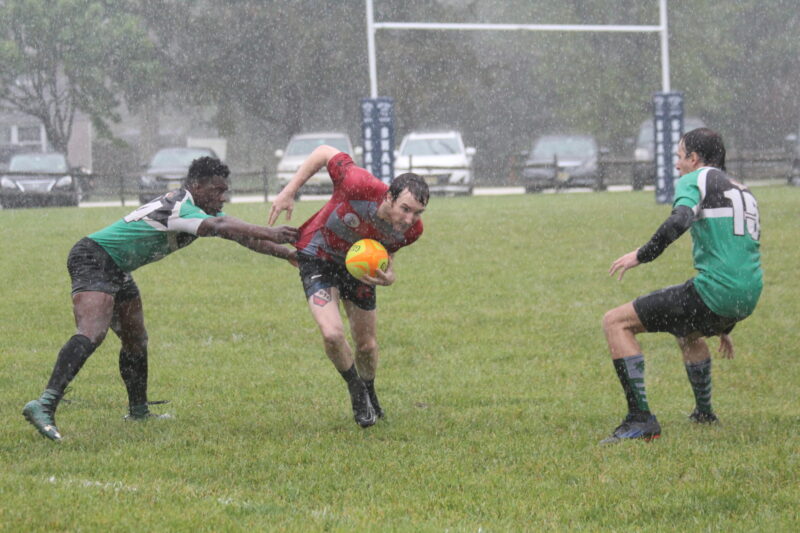 he torrential downpour that day is something that the players and spectators weren’t too fazed by. In fact, rugby games are usually only called off for nearby lightning; every other kind of weather is fair game.

After a very hard fought match, Alex shares that it didn’t go in the Sharks’ favor.

“That was the closest match in recent memory,” he shares. “I was hoping for a repeat of the 2011 match, but with the opposite outcome.”

Sean O’Mara, one of the players for the winning Devils team, agrees that the game was very well fought!

“We were up 4 tries to 1 at halftime, but Jersey Shore fought back to make it tight with the final score only a 4-point difference at 40-36,” Sean says. “I believe that the game back in 2011, we scored a try in the final minute to win.”

“All the beers afterwards were well earned either way,” Sean says.

Thanks Kyle for keeping everyone supplied with beer, and congrats to both the Devils and Sharks for an excellent match! The Devils have the winning keg trophy for now, but we look forward to next year’s game!

Cheers to all the players and fans, and see everyone next year!