Running Across NJ For Change

You might remember that in early April, Ray Pinney and Anthony Certa, two runners and all-around all-stars, ran from the tip of New Jersey in High Point all the way to the Cape May Lighthouse.

If you’re not familiar with this feat, strap in, because the story is pretty incredible! They ran the route in less than four days! And they did it all while raising money for nonprofit Dylan’s Wings of Change.

Over the course of that windy and dreary April weekend, they raised over $8,000!

Dylan’s Wings of Change is a foundation dedicated to the memory of Dylan Hockley, one of the first grade victims of the mass shooting at Sandy Hook Elementary School. The organization works with schools across NJ, CT, and NY on social and emotional learning and school climate transformation. They continue to expand their programs each year for both children and adults, with content tailored to each organization’s specific needs.

We’re incredibly proud to have been a small part of this journey with the Wingman Movement, one of the organization’s leading programs.

As runners Ray and Anthony were nearing our end of the state, their team members Founder Ian Hockley and Program Director Robb Armstrong met up at the brewery to share their progress and talk about the journey.

In this two-part blog series, we’ll explore Robb and Ian’s perspectives, and then hear some from one of the runners, and the man behind this run, Ray Pinney himself!

On a windy day in early April, Robb and Ian took a quick break from directing the runners to stop by the brewery and fill us in on their progress.

This was Robb and Ian’s first time to the Tasting Room; they typically work up in North Jersey when they’re in the area.

They’ve had some of our brews before, including staples Cape May IPA, Devil’s Reach, and Coastal Evacuation, and we encouraged them to grab a couple flights while they hung out and chatted with us so that they could try some of the over 20 different brews we have on tap.

“We have a little window of celebration to enjoy,” Robb says with a smile.

“We packaged them up to do 13 miles and a bit; they’re doing a half marathon now, and they’ll get to their next stop point and we’ll meet them after that,” Ian shares.

You might be thinking…High Point to Cape May…how far is that??

“The total run wound up being about 194 miles. 188 is the shortest route, and is what we were aiming for, but the rain and weather made that difficult,” Ian says.

When Robb and Ian stopped in to visit us, Ray and Anthony had about 42 miles to go, or about 13 hours left to run.

As Ian and Robb tried out their flights, which included Orange Crushin’ It and Sea Chest, Ray and Anthony were running around the Woodbine area, slowly but surely making their way south.

“All told, they will take 60 hours to get through the state,” Robb says with a grin.

We talked beer, breweries, and getting brews in different places before diving into how their journey has been so far. They’d been keeping fans and loved ones updated throughout that weekend on Facebook and Instagram.

The team started their journey up at the High Point monument in Sussex, NJ. Ray wanted to play Whitney Houston’s Super Bowl performance of the national anthem to kick things off. 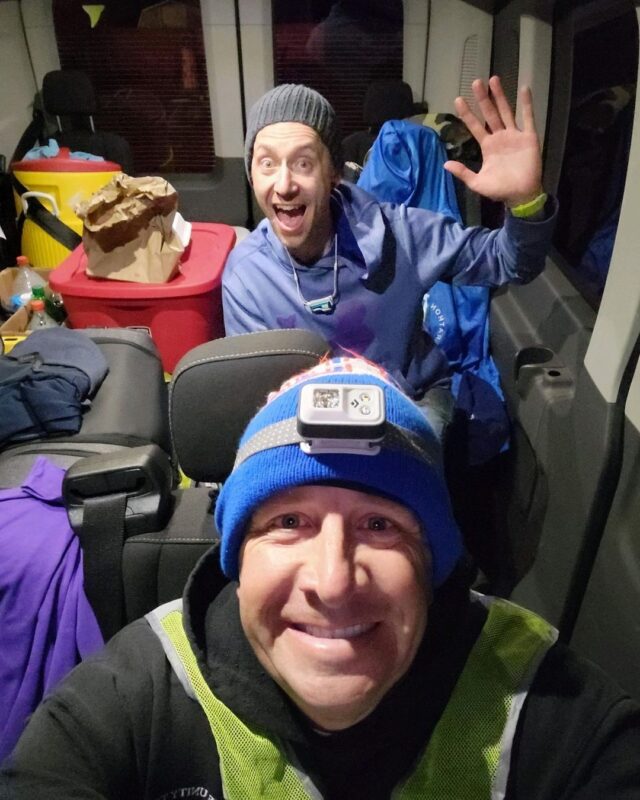 “Ray’s lovely, he’s like your favorite uncle. And Anthony is a former Marine who became a Special Education teacher after serving,” Ian says.

Both runners took a moment of reflection about the task ahead of them.

Along the trip, they found places to stop and take short breaks to sleep throughout the night, like old, abandoned gas stations. With that comes some unexpected visits from troopers patrolling the area!

“They were always very pleasant about it,” Robb says. “They were concerned about our safety and offered help.”

“At one point, we went through a lovely little village with just five points of roads coming in and out,” Ian shares. “As we passed through, people were coming out of all the shops to see what the fuss was about—we got the cow bells going and having the big van plastered with decals was quite a draw.”

“The woman who set all that up was a town official,” Robb says. “She was driving around and rounding people up.”

“There are about 800 people in town,” he notes. “She went into every shop and let people know that we were coming.”

Moments like that were surprisingly common for the group, who found generosity and kindness at every turn.

“It was amazing to see Ray and Anthony on their journey,” Ian says. “When they were tired, they’d sit down and take a sleep. Anthony would sleep right away and Ray would take a bit to get settled. They’d rest a bit and then they’d hobble out, as soreness had set in. Next time we saw them, they were running again.”

“We’d give them eight or ten miles at a time and see them again at a certain point down the road,” Ian says.

“That was our job. Meet with them, patch them up. Robb is a jack of all trades,” Ian notes. “He was fixing blisters and sorting out the van, and I’m working the spreadsheet on pace and navigating the next location to check in.” 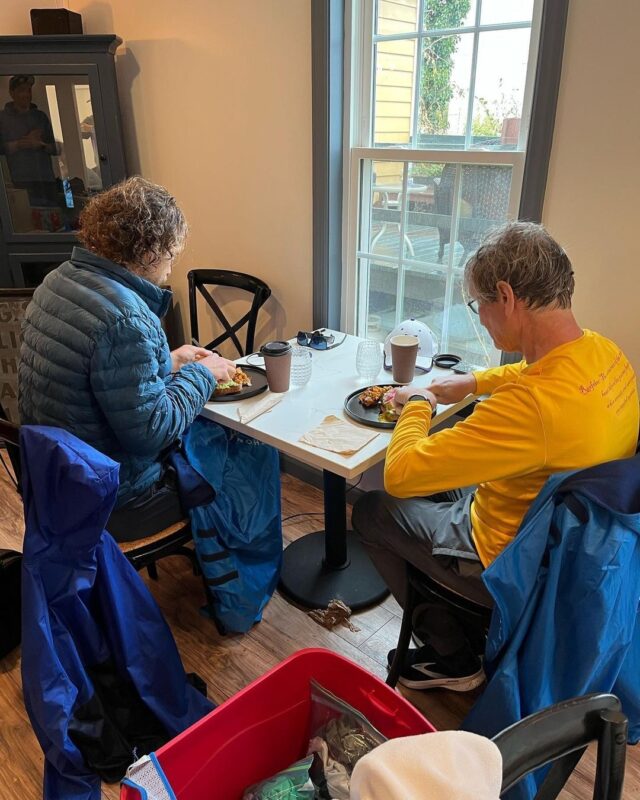 “We had some really lovely moments. Blawenburg Bistro in Blawenburg let us use their backroom to dry off and refuel after an unexpected downpour hit,” Ian recalls.

“Everybody has been great. As we were going on, we were nervous to make a huge fuss. It could have gone sideways, or ended up as a 100-mile run into the middle of Jersey,” Ian says. “The boys, to their credit, they made it happen.”

[Ed. note: We agree! Accomplishing such a difficult run is no small task, especially when the weather is not in your favor.]

As Ian mentioned previously, the run started as an ambitious 188-mile goal with about a 12 or 13-minute mile pace.

“As we started to do the math, we were like, guys we’re going really slow,” says Robb. “How are you feeling? I was hoping to gently feel them out and they were just like, we’ve got this, we’ll keep going.”

Ray and Anthony had started making about 15-minute miles towards the end of their trip.

“They started way fast,” says Robb. “Anthony was super excited. And it was downhill when we started, so they were really moving, going about 9-minute miles.” 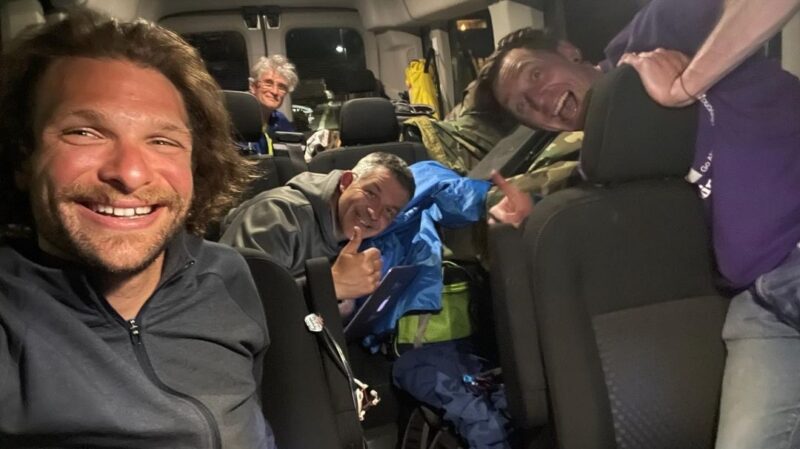 Ian shows us on his phone the ping where they can keep track of Anthony and Ray as they run.

“We told them when we left to come here, they’ve only got about three half-marathons to run. That’s it, and then you’re done,” Robb says.

[Ed. note: No big deal, right?! Any readers out there familiar with back-to-back half-marathons?]

“Ray’s mom and his brothers met us at one of the assigned pick up spots,” Ian says. “It was an emotional moment, as it was a complete surprise for the runners.”

In addition to family members cheering them on, many different people ended up meeting up with the team along the road, and a few of them even ran with Ray and Anthony!

This was the team’s first sponsored event, and we were grateful to join Kilter, Noxgear, REI, and Tailwind in helping to sponsor this run!

Before too long, Ian and Robb headed out again, and we sent along a few cases of beer with them for Anthony and Ray so that they could all celebrate once they reached the end of their journey at the Cape May Lighthouse, which ended up being in the wee hours of the next morning.

Stay tuned for our next feature, where we catch up with Ray Pinney to hear more stories from this incredible run!

If you’d like to learn more and donate directly to support Dylan’s Wings of Change, click the button below!