Chris Schiavo is one of our packaging operators who has been with us for almost a year!

If Chris Schiavo has headphones in while he works, he’s probably listening to an audiobook. He took advantage of that this summer while working the night shift, and was working his way through the Ringworld series.

“It’s a sci-fi series. I think the first one came out in 1970,” he says. “There are five different books. They explore how civilization might develop on a world with infinite area.”

We geek out about this concept for a bit before we ask him about his favorite book.

“My all-time favorite books are The Long Earth series by Stephen Baxter and Terry Pratchett. The characters and the writing style are great,” he says.

“I really like the ‘infinite possibility’ concept,” he shares. “You can have an amazing story with that because almost anything could happen.”

Chris grew up right here in the Villas. He went to a private Catholi school in Cape May, attended school in Wildwood, and then joined Cape May Tech for high school.

“I ended up going to the police academy when I was in Tech because I was in the law and public safety program,” Chris says.

He graduated from that program while in high school, getting certified as a class one law enforcement officer.

“I didn’t end up doing anything with it, though,” Chris admits. “At that level, you’re kind of like a bike cop. Essentially you write tickets and carry pepper spray and a radio.”

“At the time, I stayed with the job I’d had for a while at Gaiss’ meat market,” he says. “I worked there for three and a half years. It was really entertaining and a lot less stressful than being a cop.”

Chris essentially was involved in the entire process from getting the meat ready to sell to putting it on the shelf while he was there!

“I worked in the smoke room for the most part,” he says. “I made most of the meat products that we made there. The bacon, pork belly, every type of sausage that you could imagine. So much kielbasa.”

“From start to finish, I would cut up the meat, mix all the seasonings together, put it in there, stuff them into the casings, tie them up, put them onto the smoke rack, smoke them, take them out, put them in the walk-in fridge, cut them up, vacuum seal them, put labels on them, and put them on the shelf,” Chris says.

So we had to ask him the big question—does he smoke or cook meat in his free time?!

The answer is a resounding no (and we can’t say we blame him!).

“I ended up working at the meat market after high school for a while. My family then moved to Mays Landing, and I left that position because of the drive,” he says.

You know how sometimes things just fall into place somehow? That’s a little bit like what happened with Chris after this move.

“I had looked into the military originally for a while,” he tells us. “Initially, I looked at the Air Force. But then I talked to the Navy, and it turns out, the recruiting office was across the street from our apartment.”

“I called them one day and they were like, ‘Where you at? You want to come over?’ I told them my address and they said, ‘We’re literally across the street from you, get over here now.’”

“I took a pretest for the ASVAB and got an 87 or something on it, and then ended up scheduling to go take the actual ASVAB and got a 97; I didn’t study at all. I’d been out of high school for like two years at that point,” he says.

Because of his score, Chris was offered a role in the nuclear power sector. He joined the Navy and became a mechanic on nuclear reactors, a far cry from his former position at the meat market!

The process to get trained and certified was pretty brutal, too.

“It was a year and a half of schooling, like 12-hour lectures every day, but I did it,” he says with a smile. “We got tested at least once a week, depending on the different subjects.”

Chris found the mechanic school to be a breeze, albeit with a little bit of a nuclear twist to it. The nuclear power school, however, quickly got a bit more complicated.

“We had to study nuclear physics, like particle physics, and do heat transfer and fluid flow. We had to take more in-depth mechanical knowledge tests, like verbatim memorize a schematic and be able to draw it out on paper. I had to flash memorize so much and then regurgitate it back on the paper,” he says.

[Ed. note: Sounds a bit like how we got ourselves through college…]

Chris also cross-trained in different areas to learn how the different systems interacted with each other.

“It was definitely hard,” he says with a laugh.

Keep in mind folks, that was all in a year and a half!

“I loved it all, though,” he says. “It was only tough because they were condensing years of college into a year and a half.”

“Also, you’re being taught by people in the Navy, and not necessarily teachers. They’ve been out to sea, and they’re kind of assholes, but in a fun way,” he says with a laugh.

[Ed. Note: Fellow Navy vets can probably attest to this as well!]

“They’d also tell you stories from things that happened and how certain things might apply and funny situations you might get into because something crazy happened and how they had to deal with it,” Chris shares.

Chris enjoyed his time in the military, especially because the mechanic role was more hands-on. Thankfully, he’s here at the brewery with us, and production is nothing if not hands-on!

This month actually marks one year post-Navy for Chris, and he joined us earlier this year.

Chris is up in Ocean City now. “It is nerve wrecking driving around there because of all the people, especially on the island,” he says.

Like your typical young bachelor, Chris kept things pretty simple for moving into his new apartment. He had some furniture in storage, so all the essentials were there: “a couch, a bed, a dresser, a TV, and a TV stand. I use the box that my mattress came in as a coffee table.”

Chris is in the market to buy a home too, so he’s been working to get things ready for that. He also has a lot of college credit from his classes he took while in the Navy, so once he’s settled, he’ll be exploring his education options as well.

When he’s not on the packaging line, Chris is probably outdoors or going on a camping trip! 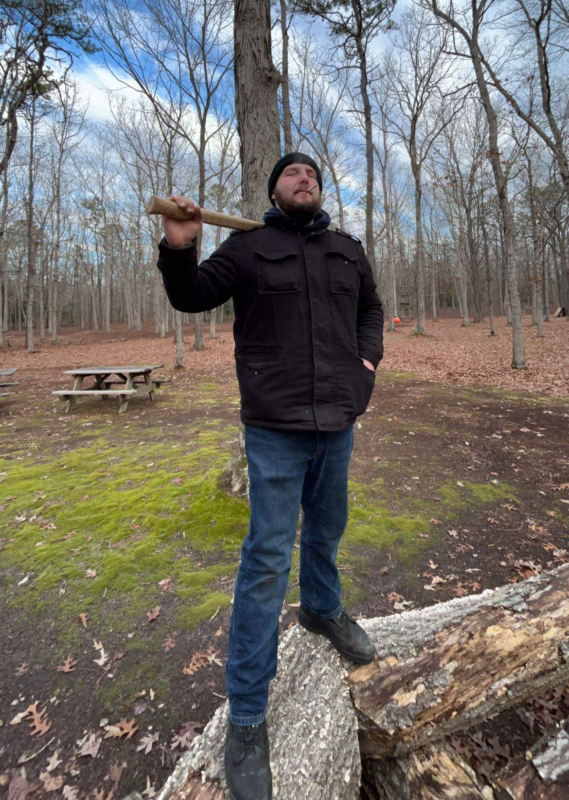 “I went to school with Zach at Cape May Tech,” Chris shares. (That’s Zach Tomlin, fellow packaging operator!) “We hang out all the time, so it was nice to have a friend here before I even joined. We were part of a group that went camping almost every weekend.”

“I also play video games,” he says. “I mostly play strategy games, or simulation games, like Civilization. I don’t play as much as I used to, but it’s there for when I don’t have anything else.”

Chris has also been branching out and finding new genres of music to listen to.

“I think I finally found the type of music that I really like,” he says. “Which is mostly indie, and a lot of it is psychedelic-inspired. My favorite bands right now are Peach Pit and Mt. Joy.”

“I like the schedule here,” he says. “I’m used to working longer hours from the Navy, so the 10-hour shift here is nothing. Having three-day weekends every week is really cool, too. And free beer. Free beer is really nice.” He grins.

“Everyone I work with is really chill, too,” Chris shares.

As for our brews, Chris likes the Hard Lemonade, and he was a big fan of Peach Ring Sour.

While he doesn’t drink beer as much, he usually takes some home and shares them with friends!

If you see Chris around campus, make sure to say hi!