A Woman's Place is in the Brewhouse

If you were with us back in 2019, you might remember the name of our latest brew, Maybe She’s Brewed With It.

In 2019, we released that brew as a Tasting Room-only release in April, and Lab Manager Lauren Appleman was the only woman working in production.

Bringing back this beer in a new iteration felt like the perfect time, as we now have four women in production: Lauren is running our lab alongside Lab Tech Ari Fenty, Polly Pollock-Bell is our incredible Warehouse Manager maintaining multiple facilities and shipping/receiving for the operations as a whole, and Emily Siddall is one of the few brewers on our brewhouse!

The beer industry as a whole wouldn’t be what it is today without women, and here at CMBC, we’re incredibly proud of that heritage, and the impact that our own team has in contributing to that history. Each year for International Women’s Day, we gather the women of CMBC to develop and create a new brew, and we’re so excited to share this year’s rendition with everyone!

“I'm looking forward to everyone, men and women, to sip on this creation designed and brewed by the women of Cape May Brewing Company. Make sure you grab a 4-pack or two to help you celebrate International Women's Day on March 8th!”

Maybe She’s Brewed With It is a 5.8% Pilsner crafted and conceived by the women of CMBC, brewed by Emily Siddall, and features Pink Boots Society 2022 Hop Blend. Pink Boots Society is an international nonprofit dedicated to supporting women in the brewing industry.

Check out some behind the scenes aspects of this brew!

When we showed up to the brewhouse mid-morning to check on how things were going!

Homebrewers and events team members Jenna Tesauro and Danielle Tesauro (who you can also find pouring and selling you beer in the Tasting Room from time to time!) were already there. They got in a few hours earlier just in time for the mash!

“It’s almost in the boil kettle now,” Jenna says as we approach. “I didn’t realize that we oxygenate our wort when it gets sent to the cellar.”

“This system is still the same system that I saw five and a half years ago, but the things that have been built in and added are so wild to see,” she says.

We stare around, too. The sheer amount of equipment and stainless steel and moving parts is staggering to see every time we set foot in production!

“Even the new spent grain system is so cool. I remember when we used to rake it out,” Jenna says with a laugh. 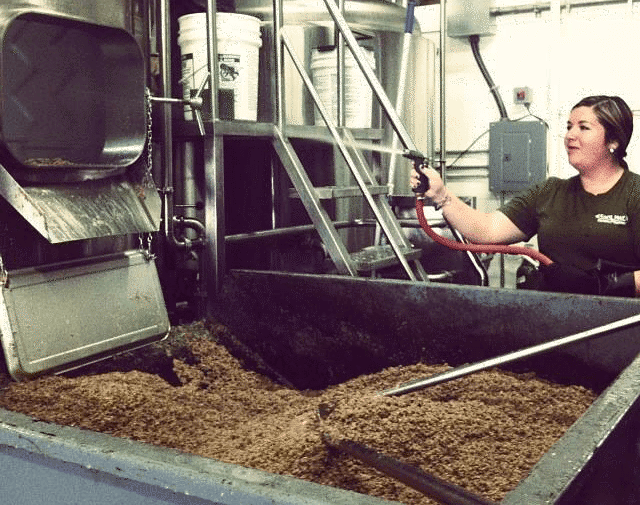 Things were getting pretty exciting, and we were eager to check out the hops addition as well.

“We’re going to do a little bit of Saaz,” Emily explains. “And then have the Pink Boots blend in the whirlpool, to get more of that aroma.”

“Saaz I really love. We looked up what the characteristics were for the Pink Boots one, and a nice noble hop was a good way to bring those flavors out,” she says.

“Saaz is there to compliment everything else, right?” Danielle Tesauro asks.

“Exactly. It has a low alpha acid, that way when we throw it in early, it’s going to pull out more of those bittering alpha acids,” Emily notes.

“Byyee, we spent you!” Emily laughs as she spins the lever on the side of the tank. 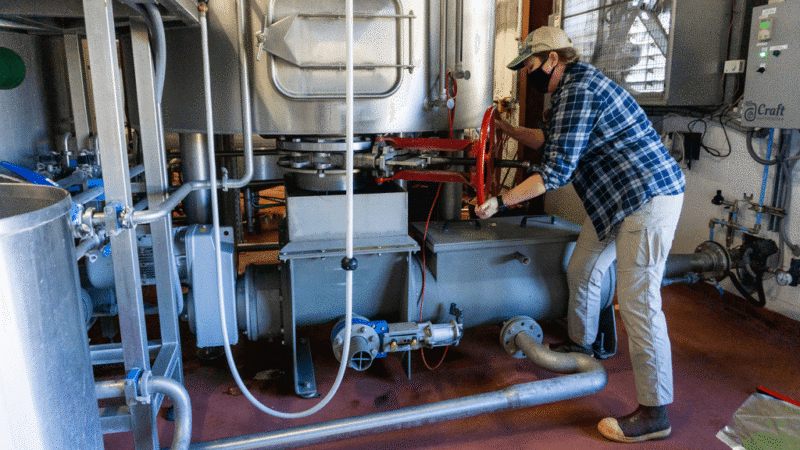 “Do you have to keep spinning that?” Jenna asks.

“Not the whole time,” Emily admits. “You have to find the sweet spot. It’s hard to tell with this one. If it’s the right level of dry, it will be really nice. It can be a little tricky.”

“Once you dial in exactly how much water to put in, you don’t have to worry about it as much,” she explains.

Jenna nods before turning to us. “The only thing I’ve done so far today is hose something down.” She grins. “I can do that and not mess anything up!”

We spot a row of beer samples by the sink and ask Danielle about them. 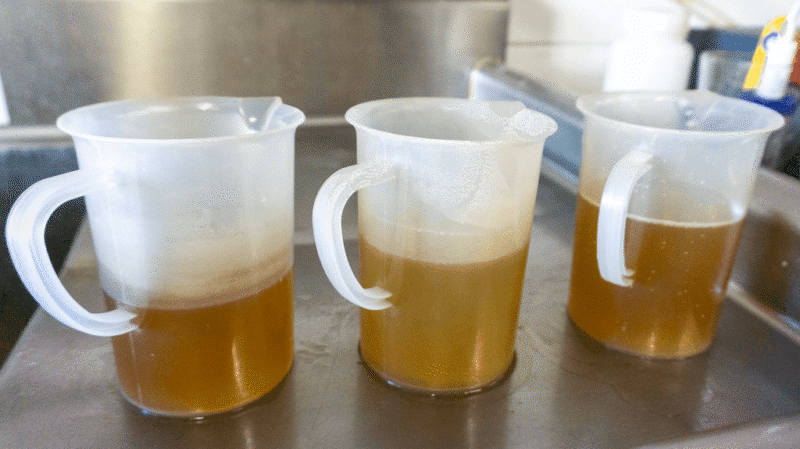 “These samples are different stages of the brewing process,” Danielle explains. “The first one we took we were recirc-ing right before we separated it from the mash. Emily will get the gravity readings from these.”

Part of the reason we check throughout the process is that, especially on a large scale, you brew a bit stronger with less liquid, then tweak it to get the right ABV you’re looking for.

“It’s easier to control it that way at this scale,” Danielle says.

If you’ve ever dabbled in it, or are an avid homebrewer, you might know the struggle.

“There’s been once or twice where our ABV was a little crazier than we thought it would be,” Danielle says with a laugh. “Especially when we first started with the system we have now. It’s much more efficient and we didn’t account for that at first.”

Jenna comes back excitedly with some hops in hand.

Brock was dry-hopping Always Ready nearby and shared some with us. We take a whiff and wow—it smells just like the liquid.

“There’s some movement—it’s almost boiling,” Emily announces. “It’s going to boil for an hour and a half.” She starts cleaning up some of the area.

“So much of brewing is cleaning,” Jenna observes.

[Ed. note: We’re pretty sure Brewery Operations Manager James Fox can attest to that as well!]

We checked in with Emily about how this brew compares to some of our lagers we’ve done recently.

“We were all commenting on how the color is very unique, like amber,” she says. “And when we were talking about the recipe—”

At that moment, JP rolls through the brewhouse from somewhere else in the building. He starts joking and then spins around and leaves just as quickly as he rolled through.

Emily grinned, shaking her head. “Yesterday, JP was like, I’m going to be all up in that Lady Beer. I was like, no boys allowed!”

“Anyway, so the liquid. We’ve done Longliner and New Year’s Resolution, and those were very pale and clear, but this one has a nice amber color to it,” she says.

“When we were talking about the recipe, we could have used the bulk pilsner malt like we did last year,” she says. “But Brian mentioned, if you want to get fancy, we could get a fancy pilsner malt, and I was like, that sounds pretty cool!”

Jenna hands us some of the malt.

“We had a couple bites,” Jenna says, nodding to Danielle.

The malt has some piney, nutty elements to it, which was pretty cool!

Another round of cheers erupts as the liquid starts boiling. Next up in the process is adding some of the hops.

“The hops you can taste, the Pink Boots, are going into the whirlpool,” Jenna says. “The initial hops now are just the crispy boi. The whirlpool hops get more of the profile, because the hops are sitting in the beer and not cooking with it.”

It’s one of our favorite things about hanging out with fellow beer nerds Jenna and Danielle—they’re full of esoteric knowledge!

While our brew boils, Emily takes us over to check on the mill.

“This is not done milling in yet,” she notes. “I wanted to see if it was. We have another ten minutes.”

“I’m impressed that you can tell,” Jenna says, observing the new mill.

“Well, it was 2,200 pounds, so based on what’s in there already, I divide the difference by 60 because it’s about a pound a minute,” Emily explains. “Since we got this new mill, I don’t exactly know how much it is per minute. I’d love to figure that out so that I could time it better!”

When we come back to witness the breaking out of the hops, “Raspberry Beret” by Prince is playing on the speakers.

We all cheer as the Pink Boots 2022 hop blend is brought out.

“Where are your pink boots, ladies?!” JP chides as he passes by.

While the production crew has some heavy duty boots to wear on the brewhouse, they’re sadly not in any fun colors…just a utilitarian beige and brown.

Courtney took a celebratory photo of the crew, which you can see below! 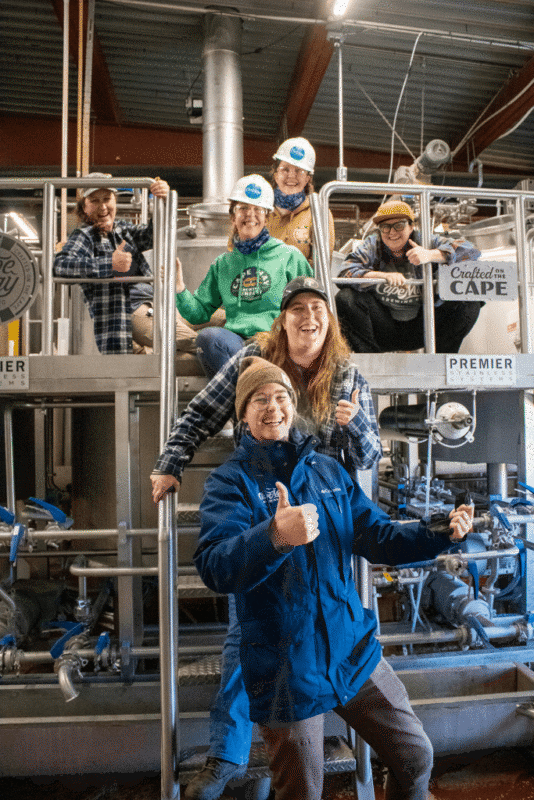 Halfway through the shoot, some Shania Twain comes on. ‘

What song, you ask? Come on now…

Thanks for taking some time with us to have fun with this brew! For its release today, we’re celebrating with some great events this afternoon.

Maybe She’s Brewed With It releases today, Friday, March 4th, exclusively in our Cape May Tasting Room on draft and in 16-ounce cans while supplies last. For every pint sold on Friday, and every 4-pack of this brew sold (including pre-orders and Friday purchases), CMBC will donate $1 to the Pink Boots Society.

We’re having a book signing from author and beer/spirits contributor for Forbes Tara Nurin, who will be signing A Woman’s Place in the Brewhouse, on the history of women in beer, from 4pm to 6pm.

We’re also excited to welcome back Nancy Malcun to the Tasting Room, who is performing from 4pm - 7pm.

Last year, this brew sold out before International Women’s Day, so if you’re looking to help support this cause, or are eager to try something new that you can’t get the rest of the year from CMBC, make sure to join us on Friday or stop by this weekend!